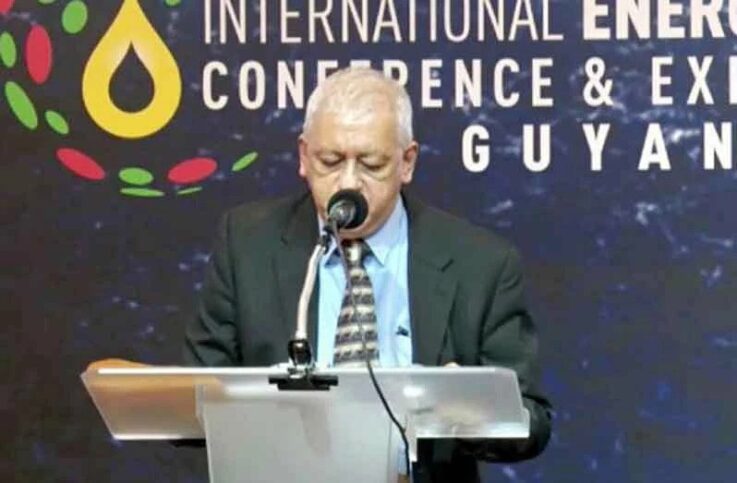 US$250M expansion for Houston shore base this year

Published by the Guyana Chronicle

The Guyana Shore Base Inc. (GYSBI) is expected to undergo massive transformation this year, with plans in place to invest a further US$250 million into the company.

Through the proposed investment, the company will be expanding its land holdings by 45 acres, according to the Executive Director of Muneshwar Limited, and Senior Partner at the Guyana Shore Base, Robin Muneshwar.

He said this on Wednesday, during the International Energy Conference and Expo at the Guyana Marriott Hotel.

Muneshwer added there has been significant growth at the company since its establishment. Guyana Shore Base Inc., which is a Guyanese joint venture made up of Muneshwers Ltd., Pacific Rim Constructors, TotalTec Oilfield Services, and LED Offshore, has been servicing the oil and gas sector for about four years and building its reputation as one of the go-to shore base facilities in Guyana.

At present, GYSBI occupies 130 acres of land around the Houston, East Bank Demerara area and is strategically located north of the Demerara Harbour Bridge, enabling the most efficient logistic solutions. The company intends to expand its facilities to 175 acres of land.

With ExxonMobil- the key stakeholder in Guyana’s oil and gas sector – constantly enhancing its operations, GYSBI has taken steps to ensure that it stays in line with the oil company’s strategic direction.

Since 2015, ExxonMobil, operator of the Stabroek, Canje, and Kaieteur Blocks offshore Guyana, has increased its estimated recoverable resource base to more than 10 billion oil-equivalent barrels.

Recently, the company started production at Guyana’s second offshore oil development on the Stabroek Block, Liza Phase Two, bringing the total production capacity to more than 340,000 barrels per day in only seven years since the country’s first discovery.

Payara, the company’s third project in the Stabroek Block, is expected to produce up to 220,000 barrels of oil per day after start-up in 2024, using the prosperity Floating Production, Storage, and Offloading (FPSO) vessel.

The US$9 billion development will target an estimated resource base of about 600 million oil-equivalent barrels. Ten drill centres are planned, along with up to 41 wells, including 20 production and 21 injection wells.

To capitalise on the impending developments, GYSBI, in 2021, had unveiled its plans to construct two new berths for US$16 million, to boost its capacity to accommodate Platform Supply Vessels (PSVs) at the Muneshwers Houston Port Complex.

The berths – berth three and berth four– will allow PSVs space to anchor, similar to that of a wharf. The berths are being constructed using the Open Cell Sheet Pile (OCSP) system, a first-of-its-kind technology to be used in Guyana, which was patented by American engineering consultant company, PND Engineers, Inc.

Currently, GYSBI has two berths– berth one and berth two – which facilitate transport on the southern half of its Plantation “A”, Houston, Greater Georgetown location.

“Five years and US$200 million later, we sit on 130 acres, two berths and seven warehouses with expansion plans for another US$250 million over the coming months… by the end of 2022, this will go to 175 acres of land four completed berths and 650 employees,” Muneshwar said.

He noted that the company’s expansion is directly correlated with ExxonMobil’s unparalleled success in the fields.

The shore base, as is, is servicing a majority of ExxonMobil’s drilling programmes, which cover six rigs, supporting both development and exploration activities.

“As I speak, GYSBI is completing the development of two additional berths with heavy lift capability. Once completed, these berths would allow us to handle up to 130 tonnes, which is significantly more than any other berths in Guyana.

“This will, therefore, ensure that these services are provided right here and ExxonMobil will no longer need to execute its heavy lifting out of Trinidad and Tobago. With this completion too, an additional 65 new jobs will be created for locals. It is not just about the top-notch facilities we offer,” Muneshwer said.

He noted that at January 2022, of the 227 vendors registered to do business with the company, some 85 per cent are Guyanese.

He reminded the local investors of the importance of partnerships within the oil and gas sector, noting that there are vast opportunities available within the sector that could only be accessed with through partnerships.

“None of this could have been possible without one key ingredient that is collaboration GYSBI itself is a joint venture, a company created by local and foreign companies pooling their strengths and working together for a common goal.

“I had over 30 years’ experience in running commercial ports with no knowledge of the oil and gas industry so I found it necessary to find the right partners who had decades in the industry and each of them brought unique strengths to the relationship,” Muneshwer said.